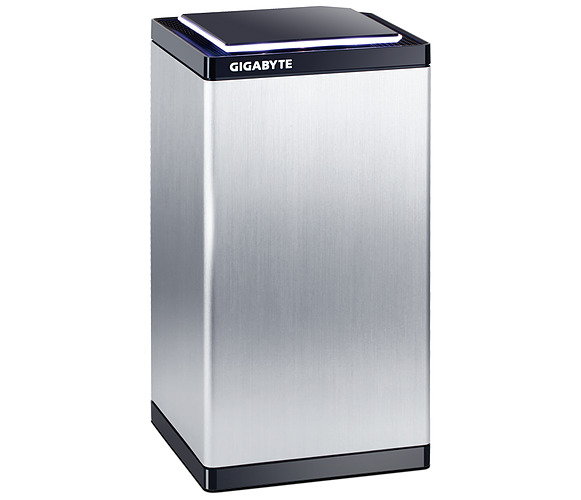 Gigabyte has just launched a new mini-PC in its range Brix, the Brix Gaming UHD. We had already glimpsed quickly this model at Computex .

Visually, it is a tower with a square base (11cm side height 22cm) with a flattened area in which we will find the connectors on the motherboard, namely two USB 3.0 ports, two USB 3.1 ports (one Type-a and Type-C), a Gigabit Ethernet connector, audio jacks and two connectors for WiFi antennas. To the left of these ports, we will find those of the graphics card, namely a three HDMI and Mini DP.

On the motherboard, there are two slots M.2 2280, respectively connected to the CPU and chispet and an M.2 PCIe slot in which is placed the Intel 8260 WiFi card (ac). We can also place two SATA 2.5-inch, one behind the graphics card, and the other in the opposite corner next to the processor heatsink.

Cooling is provided by a single 92mm fan that draws air from the bottom and passed through the housing to come out on top.

This design Gigabyte has the merit of being original, even if it reminds us, at least in the idea of his diagonal motherboard Mac Pro .

Gigabyte announces a price around 949 euros for the Core i7 version without clearly specifying availability should happen in the coming weeks.