MWC and CES: The Gadget Highlights 2017 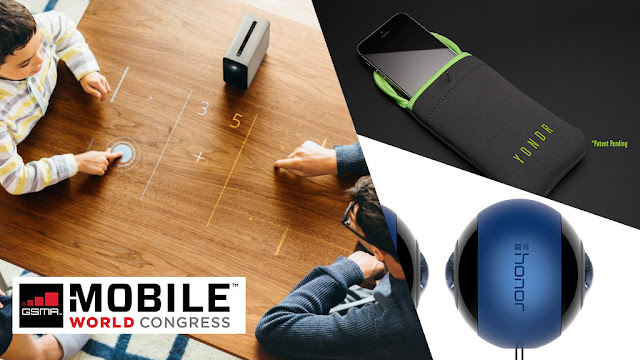 Full-sized refrigerator, car speaker: Many everyday devices now have smart functions. More and more, trade fairs show products where one would never have thought of networking. At the Mobile World Congress (MWC) in Barcelona (February 27 to March 2, 2017), companies will be showing again some of the strange ideas they want to conquer the market. In the photo shows you can see the highlights of this show and the best gadgets of the Consumer Electronics Show (CES) in Las Vegas, where the manufacturers showed the first trends of the year in January.

Sony Xperia Touch: Projector for all occasions
At the MWC in Barcelona, ​​technology manufacturer Sony presented a new projector. The Sony Xperia Touch not only projects films onto a white screen. It turns any flat surface into a HD touch screen with a diagonal of 23 inches. Users can then control the screen with gestures and touches. For example, cooking recipes can be easily displayed on the work surface. Xperia Touch is compatible with PlayStation 4 Remote Play and all Google Play Store apps. The projector appears in the spring and is expected to cost nearly 1,500 euros.

This 360-degree camera has already introduced smartphone manufacturer Honor in Asia.
360 degree camera for the smartphone?
Huawei has introduced a new 360-degree camera in China under its label Honor, which the company wants to market worldwide. Little is known about the technical specifications. The ball-shaped camera can be connected to any smartphone via a USB-type C connector, and the associated app allows you to save and share your recordings. The Honor VR supports both pictures in 3K and all-round videos.

The clever brush for healthy hair
In the morning it is mostly sleepy in the bathroom. The head half-deep, follows a handle to the brush to comb the hair in shape. Spliss is often undetected - not for the new Kérastase Haircoach from L'Oréal : sensors developed in collaboration with Withings analyze the hair and pass the data to an app. The warns against broken shards and proposes suitable shampoos - all of which come naturally from the brand Kérastase and cost around 20 euros. As COMPUTER BILD chief editor Axel Telzerow demonstrated at the CES , this also works with the beard. The brush is to be available from mid-2017 for under 200 euros.

Garbage can, open up
Garbage cans in many people cause a comprehensible disgust. There land of any kind lands and starts to stink fast. Avoid contact with the valve, if the germs do not end up in the hands. SimpleHuman's smart trash can solve this problem. With the simple announcement "trash can, open you" the lid opens. After you have fed the bucket with waste, it automatically closes again. This keeps the hands clean.

Monitoring for the children's room
Toy maker Mattel wants to make the child's education a bit easier with a new camera. A "smart smart-home hub" for the children's room monitors the little ones in their rooms. At the same time, the system functions as a virtual nanny. The loudspeaker Mattel Aristotle recognizes uneasy phases and responds by playing songs or reading stories. By the way, the device is also a soothing night light - even for big children.