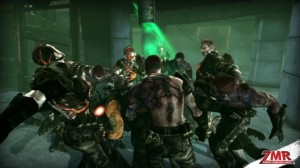 This game, also known as Hazard Ops in Europe and originally called Mercenary Ops 2, shares many mechanics of the popular game Gears of War and uses the Unreal Engine 3 to offer several modes of addictive gameplay, from PvE to PvP. Although players can fight each other in ZMR, the game focuses on teaming to wipe out waves of enemies together and earn high scores.
Zombies Monsters Robots, kill all zombies

The zombies will approach through doors and windows, which can be repaired by points, and if you do not care for the back, you will be surrounded by these evil beings.

Some rooms are equipped with deadly traps that are as dangerous to you as they are to enemies. In one appears a gigantic rotating cylinder covered with spikes, like a roller of demonic painting. Others burst into flames, cleaning up everything that was crawling. After about a dozen waves, you can battle a boss hangman that can be a problem. An excellent game very addictive and full of action from which you will not be able to take off, so do not wait any longer and start downloading Zombies Monsters Robots for free.