Samsung Galaxy Note 8: Leaked photo is circulating in the web 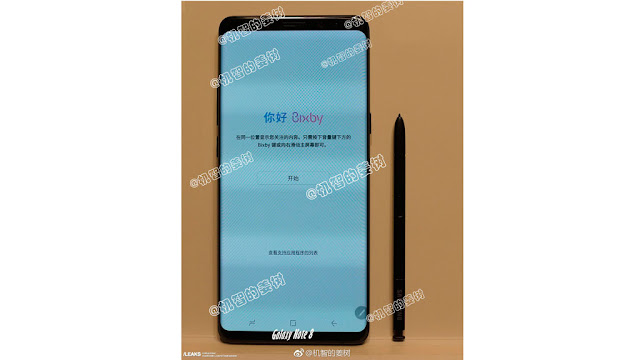 Kaum Samsung has introduced its new flagship Galaxy S8 on the market, make new rumors about the successor to the margins smartphone Galaxy Note 7 round: currently going around a geleaktes photo that appeared previously on the Chinese microblogging service Weibo and now among other things, The website of Slashleaks.

Galaxy Note 8: Design the Galaxy S8?
The design of the smartphone pictured here looks similar to the Galaxy S8 Plus - it has a large display with very narrow edges, next to it is an S-Pen. But why is it assumed that this could be a new Phablet of the note series? Although the name "Galaxy Note 8" is in the photo, but the authenticity there is no solid evidence. Only one sign can be found at the lower right edge of the display: There is a button with Stylus symbol to recognize - probably the S-Pen function can be started. This could be an indication that this is the Galaxy Note 8.

Galaxy Note 8: Display size and Specs
If the photo really shows the Galaxy Note 8, it would be a proof that Samsung adheres to the new design line of the S-Class. In addition to the leaked photo, Mashable has apparently learned more specs: allegedly the Samsung Galaxy Note 8 comes to a display size of 6.4 inches. This would make it a little bigger than the 6.2 inch display of the Galaxy S8 Plus. It is also equipped with a Snapdragon 835 processor, 6 GB RAM and up to 256 GB of internal memory. Until Samsung officially presented the Galaxy Note 8, one must be patient until August or September 2017. Before, the new edition of Note 7 with a smaller battery is celebrating its premiere.