Download Now you can enjoy your Windows games on Linux 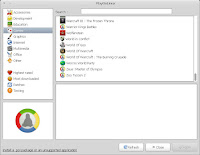 Now you can enjoy your Windows games on Linux Download One of the disadvantages of those who had decided to change operating systems was that they could not play the same titles, or at least, in some cases, they were not compatible.That is why the PlayOnLinux program was developed,in response to this problem.

Many of those who have gone from having Windows as an operating system and have gone to the path of Linux (Ubuntu to put a case), miss their games, those who entertained them for hours and hours. From now on, you can reuse them thanks to PlayOnLinux.

This free download program uses a very famous tool called Wine, which allows you to run any Windows program inside Linux.

Among the games you can play again on your computer are: Call of Duty 3, Caesar 3, GTA San Andreas, Diablo II, Prince of Persia, Tomb Raider, Starcraft, World of Warcraft and Warcraft III. A listing more than interesting. It's worth downloading PlayOnLinux to not let them down.

Download Now you can enjoy your Windows games on Linux