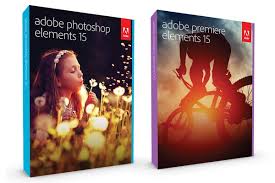 Adobe has been using Photoshop for decades to edit images - Adobe Photoshop Elements 15 is designed for the home user.

Test Conclusion: You must know
Adobe Photoshop Elements 15 brings all the important functions for ambitious hobby photographers and is easy to use - for most users the version is quite sufficient. With Photoshop CC, professionals get the last piece out of a picture. For this, however, it takes an induction time.

he asks professional photographers or graphic artists usually gets always the same answer: "You want good photos? Then work with Adobe Photoshop. "Sure, the software has since the first version of 1990 to the most powerful image processing program advanced. But does it really have to be for anyone the expensive professional solution? Finally, with Photoshop Elements 15, Adobe also has a much cheaper alternative.

Basics or extreme editing?
Image processing can be roughly divided into three groups:

Photoshop Elements 15 can do a lot
Adobe also knows that Photoshop CC with its subscription price of 12 euros per month is unnecessary and too expensive for the majority of the amateurs and has a cheap and stripped down version with Photoshop Elements 15. For one-time 99 euros, both beginners and advanced users get a powerful image processing software. Photoshop Elements provides easy access to basic features such as aligning a photo and has prefabricated filters to enhance photos. In addition, photos can also be organized, making additional photo management unnecessary. In the current version, the user can also combine effects, add different frames, and tag photos with keywords such as "dog", "sunset" or "Hamburg". So he finds photos later faster. A special highlight: hanging the corners of the mouth sadly down on a portrait, they can be moved to a friendly smile with just a few clicks - so simply did not go so far. Also helpful: When importing photos, Elements automatically assigns so-called smart tags so that the photographer can retrieve his images later.

This can not do elements
Photoshop CC lets you correct multiple photos in batch processing. In Elements, this is only possible to a certain extent, for example, to change the image size. Actions, that is, certain workflows to optimize an image automatically, can only be applied in Elements, but can not be created by itself. In addition, there is no access to the gradation curve to adjust the contrast in an image or the ability to edit dark areas (depths) and lights precisely. Important for graphics fans: Photoshop Elements 15 does not provide 3D functions. And the Adobe Cloud, which can be viewed and edited on the Smartphone or Tablet in Photoshop's CC subscription, is not available in Elements.