That's why the Thermomix hype is on my knees! - Quickdo Blog

Home Hardware That's why the Thermomix hype is on my knees!

That's why the Thermomix hype is on my knees! 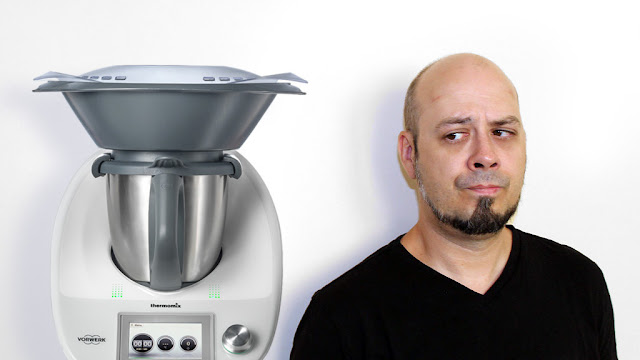 I know what you think now: "What does the man have against the thermomix?" This device is a true miracle of technology and makes the cooking and preparation of the food so uncommon, which is an eternal nuisance. " I do not deny that the Thermomix is ​​a brilliant invention. Vorwerk has really done a lot of work with this multitalent. No, the unit can do nothing for my resentment. They are the owners of this miracle machine, which rob me of my last nerve.

The thermomix as a static symbol
The car loses more and more symbolic power in Germany. Previously the Mercedes was still a sign of prosperity before the front door. Today, he is at most a muddle. In Germany, it is no longer possible to name a six-liter V8 sled. Obviously people without status symbols do not come out. Therefore, new equipment is being sought, with which one can show off its social status. For one, this is an iPhone, for the others a sinfully expensive bike and for others it is the Thermomix. What all things have in common? They cost as much as a small car. The car then plays a role again. Only as an object of comparison.

As with many statistic symbols you are looked at obliquely, if one then with a more favorable alternative comes. "The Monsieur Cuisine of Lidl is not bad, but next time we would like to cook with us again." It is the super cute statements that particularly non-owners of Thermomix meet. The "Aber-sentences". "Great, but the QUIGG-Kochmixer from Aldi has integrated the scales?" "Not a pity, but so many delicious recipes as for the Thermomix is ​​not there?" Heaven, I know my device is not as great as yours. Come down from your high horse. Is there envy in me? Maybe. Is there such an approach as a hint of arrogance? Most certainly!

The Thermomix as a religion
I've been a long time against the thermomix and all copies. Is not that another superfluous kitchen machine, which can be ordered at night at QVC and then after a few inserts in the kitchens stumbling? Not at all, as I had to find. I said that when I came to meet with Thermomix friends, I was even punished for the negative word about this high-performance machine, as if I had the chef-dev in person. And then I was exorcised for hours. The disbelief was me with recipe book , Varoma and Spatula almost beaten out. In the end, I had to acknowledge the infallibility of the Vorwerk deity. If the thermomix could at least cure cancer. But here the glory of the golden calf has come to an end.

As with all believers, Thermomix disciples can not be converted. How often have I tried to convince my friends that the Thermomix is ​​not the holy grail of the kitchen. Like the ten commandments, the twelve functions of the machine were enumerated. And now the Thermomix can even get into the Internet . I am afraid of the next cooking evening with my friends. The invitation is already on my desk. I have not told you yet. It is noticeable to me that such invitations flutter more and more rarely into the house lately. Perhaps I am in my circle of friends as the black sheep. Well, for an unbeliever must always exist. In addition, there are the most favorable thermo-kitchen machines as an alternative to the thermomix.