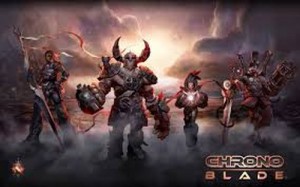 Chronoblade Download is a 3D side-scrolling MMORPG game , developed by NWay. The game focuses on players progressing through alternate worlds in individual dungeons that are presented to the player with a wide variety of enemy types as you progress. Players have access to primary and secondary attacks, which can be linked together to create unique combos, as many as are available in games like Street Fighter . In addition to individual attack combinations, players can also block and attack enemies as well as use special abilities unlocked through the character tree of each character.
Chronoblade, online adventure inside dungeons

A total of 4 characters will be available at the start, with players cooperating in groups of up to 4 in each dungeon. As players level up, they gain access to skill points that can be spent on two character trees separated by characters. These skill trees offer players the option of active abilities and passive traits that can be slotted to create unique play styles. A character can, for example, only slot passive skills in order to maximize his damage through automatic attack combos.

A game that has a story, plus a fun PVP mode.

Do not wait any longer and start downloading Chronoblade for free.