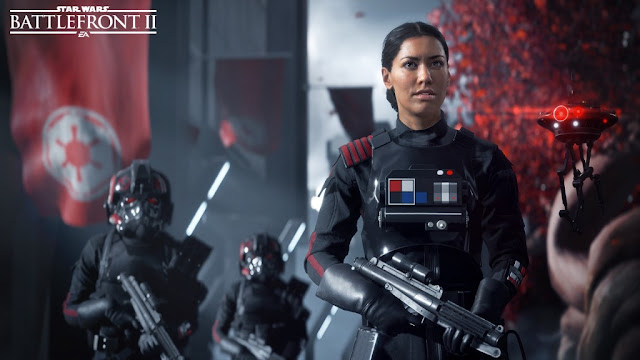 The most important innovation in "Star Wars - Battlefront 2" is undoubtedly the solo campaign launched by the Canadian game developer Motive Studios. Star Wars: Episode 6 - The Return of the Jedi Knights ", the plot tells the fate of the imperial elite soldier Iden Versio. Or more concretely, they do not experience the campaign - from the perspective of a rebel warrior, as many fans suspected beforehand, but from the point of view of a person who fought passionately for the empire for years.

The actual game begins with the destruction of the second Death Eater. Versio and members of their "Inferno Squad" are now on the Waldmond Endor, when the orbiting station is burning in a giant fireball.

Variety preprogrammed
A self-contained story-mission has not yet been presented in Orlando. However, there are numerous sequences that show where the journey should go. In the course of the campaign, the player travels from one battlefield to the next with a specially designed space ship, in order to properly reel the rebels in a variety of missions. If it goes to Dice and Motive Studios, fans can look forward to sabotage and infiltration missions, but also to fierce battles on the ground as well as opulent battles in the universe.

Exciting from the gameplay point of view: An imperial droid docks on the back of Iden's armor, Who, if necessary, floats in the air and reaches the heroine in various ways under the arms - for example by making rebels with electric shocks unfit for battle. In the course of the game, it should also be possible to customize the droid with new abilities. The developers did not want to go into the matter so far. It would be possible, however, for the droid unit to later also hack security doors, tap data terminals, place traps, and explore enemy terrain from the air.
Video on the topic

According to Game Director Mark Thompson, the story is also spiked with some crazy perspective changes. "We have a mission to play Luke Skywalker, among other things." The first campaign impressions are finally rounded off by the announcement that a completely new planet was created in close consultation with Lucas Arts. The heavenly body is called Vardos, is Iden's home and something like an "imperial utopia". So far, there was only one conceptual artwork to be seen. It shows a huge complex of buildings spoiled by imperial banners, majestic trees and futuristic lifts - in which, apparently, even a fulminant material battle with AT-ATs takes place.

Multiplayer battles from every era
No "Battlefront" without a multiplayer mode. This unwritten law applies, of course, also for part two, the online part of which is being developed by Dice in Stockholm. While the last "Battlefront" centered on the original trilogy (Episode 4 to 6), as well as the time before Episode 7, the multiplayer battles extended across all three "Star Wars" epochs. Dice himself promises a variety of scenarios, weapons, vehicles and heroes from all previously released films and announced during the presentation, among other things, the operas Hoth, Endor, Takodana and Vardos. Interesting and especially authentic: The look of the figures and vehicles automatically adjusts itself according to the chosen map.

Headache individual
Two major criticisms in the first "Battlefront" were the absence of shooter-typical unit classes as well as the only marginal individual characters. "Battlefront 2" is a different game: Choose between different fighters before you play, and you will also gain access to new gadgets.

Also new: Slipped through the collection of so-called heroic pick-ups in the role of Darth Vader & Co., this possibility is now bound to a resource system. Unfortunately Dice did not want to explain the accompanying game mechanics. It is, however, to be assumed that successful launches,

Already confirmed in Orlando are the characters Darth Maul, Yoda, Kylo Ren, Luke Skywalker and Rey as well as the vehicles Millennium Falke, Skalve 1 and First Order Tiefighter - all of course of course upgradeable and customizable. Sounds like a worry-free package? Almost, because at the present time many questions remain open. To a Splitscreen mode and new Multiplayer game modes, for example, Dice lost so far no word. The same applies to details on possible VR content, microtransactions, PS4 Pro and Project Scorpio optimizations as well as special eSports functions. At the latest at the EA Play Event at the beginning of June 2017, however, the Swedes are also likely to talk about Tacheles.

Forecast: Star Wars - Battlefront 2
Larger, more beautiful, more versatile: With "Star Wars - Battlefront 2" Dice patches exactly where part 1 still pressed the shoe. The beginning is a promisingly staged story campaign with a charismatic elite fighter of the Empire in the lead role. But also the new multi-game mode with content from all three "Star Wars" -pokes looks like a lot of fun. An explosive space battles, a class and resource system, upgradeable hero characters, individualized vehicles, tauntauns as a riding animal - so far, there is much to suggest that "Star Wars" fighters will get their money's worth on 17 November 2017.