Champions League: Quarterfinals in the wake of Dortmund's assassination attempt 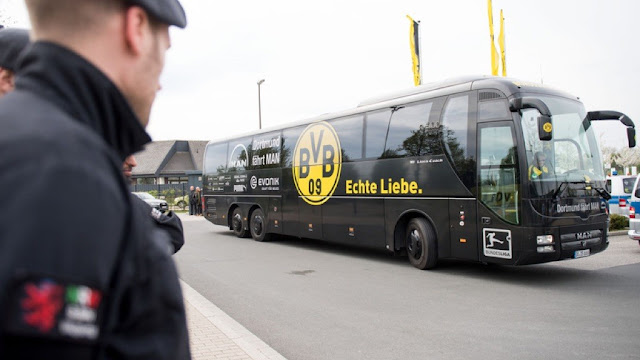 Best instead of anticipation - the Dortmund pros are probably the most difficult game of their career. Not 24 hours after the police "targeted attack on the team coach" the BVB against the AS Monaco must not only a difficult sporting task, but also an emotional exceptional situation to cope. "That will not be easy. The team is in a certain shock. You will not get those pictures out of your head, "said Managing Director Hans-Joachim Watzke.

Despite grief and shock: Dortmund plays tonight
Despite obvious arguments for a later date, the decision fell after a brief discussion. "It is very difficult for us, but the schedule does not provide any other possibilities," commented BVB media boss Sascha Fligge, commenting on the agreement between UEFA and the two clubs to catch up on the canceled match day. Marc Bartra was less fortunate than his team-mates: the Spanish defensive player had a break in the spokes as well as foreign body injuries on the right wrist during the explosive attack immediately after the departure from the team hotel to the stadium and was still operated in the evening. "We are all in our thoughts at Marc," says Marcel Schmelzer.

View Profile Real Madrid: Increased security measures
After the bombing of Dortmund the security precautions for the football classic between Bayern Munich and Real Madrid have been increased. On Wednesday, 450 policemen were to be deployed instead of the planned 370 police officers - mainly around the team hotels. Already in the morning the police had the buses of the two teams of explosive dogs searched. "And we will also search the buses again so we can rule out any danger," a police officer said. It is also possible that the buses choose a different route on their way to the stadium.

Visitors to the eagerly anticipated quarter-final first leg in the 70,000-strong Allianz Arena will be under intensive security control. FC Bayern asked for a timely arrival at Twitter.

Champions League: Here you can see the games
Dortmund and Monaco pick up the game, which was canceled yesterday, at 6:45 pm. The match of the Bavarians against the royal from the Spanish capital then rises at 20:45. If you want to watch the match between the BVB and the AS Monaco live on TV, you can do this only on Pay TV: Sky will show the game live tonight. The match between FC Bayern and Real Madrid, on the other hand, is also available on free TV; The ZDF broadcast live tonight. For more football, the Sky Supersport package is a great way to see all the Bundesliga, UEFA Champions League, UEFA Europa League and DFB Pokers games on TV, PC, tablet and smartphone. Some games of the Europa League can be seen at Sport1 on the Free TV.

Tickers, radio and apps
If you can do without moving pictures is still live: The web radio Sport1.fm transfers the lot also as Livestream-to the zero tariff! Fans listen to the game report on the Sport1.fm website or the Sport1.fm app for Android or iOS . If you do not have a live transmission, or you want to check the results for a while, you can keep up with the app. This is also possible by other applications: Via Sportschau-App, for example, you can follow the game in the Liveticker. An alarm function informs you about the penalty, goals, and place references-so you do not have to stare nonstop on the display.