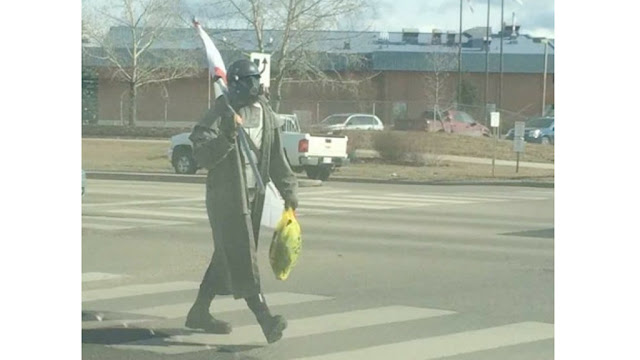 In fact, it is the knighthood for a cosplayer, if its costume from the outside is felt as real. However, a young Canadians would have preferred not to honor this - it brought him some trouble. The costume fan from Grande Prairie, according to a media report, was in full gear on the way to a change tailoring to make adjustments to his disguise, when passers-by were attracted to the oddly dressed man and the police turned on. The guess: The end-of-the-line fighter with the New California Republic flag in his hand could carry a bomb on his back.

Chipsets instead of bombs
While the tailor was just putting his hand on the costume, several patrol cars were standing in front of the shop, and armed police officers took the potential bomber. The lawmakers contacted the tailor via telephone. He confirmed on request that he had discovered several cables on the costume. The police then asked him to leave the building through the rear entrance. After they had contacted the cosplayer, the alleged bomb quickly emerged as a series of silver-coated potato chip cans. The costumer had nevertheless to come with the guard, but was dismissed in the end without notice.